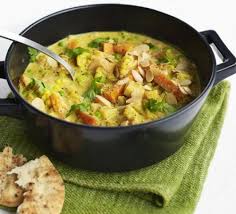 For this we need finely chopped boiled vegetables like carrots, green peas and French beans.

Then there is paneer or cottage cheese which needs to be fried.

The tomatoes should be boiled, skinned and chopped into small pieces.

And the cottage cheese must be cut into medium sized cubes and fried until it changes color slightly.

For preparing the gravy, take some butter on a pan. Since we are preparing Vegetable Korma, it’s alright to take butter in an adequate amount.

Once the butter melts, we’ll add some cumin seeds.

Now that the mixture has turned golden brown in color, we’ll add in the onions.

Let it roast for some time.

There shouldn’t be any water part left.

After we saute the onions nicely, we’ll add in the tomatoes.

Tomatoes have been boiled, peeled and chopped into small pieces.

There’s a reason behind making any recipe. If we us the tomato puree uncooked, it has its own taste and smell. Similarly, if we cook the puree before using it, it would have a distinct smell and taste!