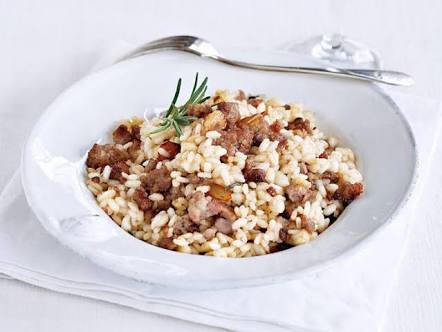 A terrific way of exploring a country’s culinary history is by going on river cruises. Italy has an array of traditional recipes which vary hugely depending on the region. You can get a great introduction to Lombardian cuisine, for example, in the beautiful city of Mantua. With a great range of mouth-watering main courses and delicious desserts, it may be hard to know which dishes to order off the menu. To help you decide, here are some of my favourites.

One of the most popular dishes in this Italian city is Luccio in Salsa, or ‘pike in sauce’. The recipe was first described in the Treaty of Stefani which celebrated the pike fish as an excellent source of nourishment. It suggests flavouring the dish with lemon juice, parsley, anchovies, garlic, capers and oil before boiling the fish. Most restaurants will serve it with a tasty accompaniment of salty vegetables and a glass of cold white wine.

This dish, literally called ‘Rice of the Pilot’, gets its name from the aviators who were sent out to husking the rice. This risotto recipe is slightly grainier than the traditional rice dish. A carefully measured out level of water is added to the rice and brought to the boil; the starch then simmers for a precise amount of time, before being taken off the heat and left to rest. Chefs often season the dish with a pinch of salt, a knob of butter and some grated cheese. You can also have it with pork chops or Italian sausage.

Another iconic dish from Mantua is Tortelli di Zucca, a delightful classic pasta recipe. The egg-based pastry is stuffed with fresh pumpkin which is seasoned with spicy mustard, amaretti and nutmeg. Traditionally Italian chefs also add a pinch of parmesan to balance the sweetness of the pumpkin, while more experimental takes on the tortelli can incorporate a butter-based sauce with onions and tomatoes.