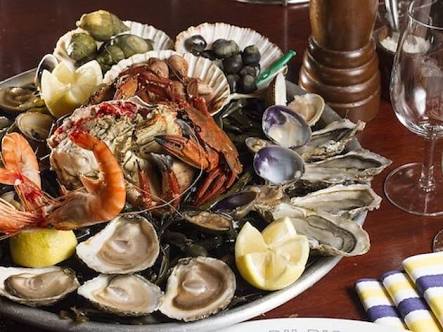 For the pastry lovers the whiff of crispy croissant from a French Bakery spells magic and for the sweet toothed kind soufflé is the buzzword. Le Soufflé at Mont Thabor and Le Recamier at Recamier are the best places to get your dose of these light clouds of sinful sweetness dusted with a little snowfall of sugar.

Influenced by a diverse cultural bonhomie, Singapore is effervescent with a rich tradition where food rules. Rice, noodles and Seafood are juxtaposed with a multifaceted cuisine influence that spells Asian, Malay, Chinese and European as its essence. The street food scene in Singapore is fresh and offers a nonchalant way of enjoying its culinary delights.

The best foods in Singapore are undoubtedly the traditional ones like the Fried Carrot Cake stalls at Kensington Park, the softly steamed Dim Sums at Jalan Besar, Sims Ave and Chinatown, or the Oyster Omelette at Serangoon. The Kaya toast is a Singaporean breakfast staple. The best places to grab a bite are Killiney Road, East Coast road, Hong Lim Green Community Centre and the Far East Square. For a more savoury experience, try a bowlful of Laksa and Chilli Crabs. The Queensway Shopping Centre, East Coast Road and Jalan Berseh offer a great fair of Laksa. Geylang, East Coast Parkway, Casuarina are the best places to hunt down a hot bowl of Chilli Crab.

Somewhere in the middle of Chicken Tikka Masala and a traditional Roast dinner, London has absorbed many distinct flavours. The Romans, Vikings, and the Normans, have all together played a vital role in defining British Cuisine as it stands today. A multicultural potpourri of cuisines and cultures thrives in the lanes of this part of Great Britain.

London has now become the culinary capital of the world. It houses more Michelin starred restaurants than France. Some dishes will always be a British favourite. Nothing beats a crispy assortment of Fish and Chips. Grab the good old plate of this English staple at Poppy’s in Shoreditch, Spitalfields or Camden.

Britain’s love for a savoury Beef Wellington can never be overlooked. Named after the Duke of Wellington after he defeated Napoleon in the battle of Waterloo, the dish is a national treasure of sorts. To get spoonful’s of this indulgent dish, head to Bob Bob Ricard in Mayfair or to the good old Smith of Smithfield in Farringdon.

Head to Aside in Peckham to grab crispy fluffs of Yorkshire Puddings with a hearty Sunday Roast or run to the lady Abercorn Pub and Kitchen for a bottomless version of your favourite puffy crisps full of goodness.

Hong Kong cuisine has a wide Chinese influence on its taste, and texture. The skyline of the city is a sight for the sore eyes at night. Between the twinkling skyscrapers and the ambitious metropolitans, the busy streets of the city offer the best food fairs which celebrate the intermingling of Cantonese and Chinese cuisines.

Nothing can beat the savoury sight of a perfectly Roasted Goose hanging from the iron bars in the local street side restaurants of Hong Kong. Some of the best places that specialise in this delectable dish are Yue Kee, the Mandarin restaurant in Ting Kau, the Yak Lau restaurant in Central and the Kam’s Roast Goose in Wan Chai.

There is a popular culture of drinking traditional Chinese tea called Yum Cha in Hong Kong. The hot sips of yum cha are accompanied with soft delectable steamed wontons or dim sums. These little tasty nibbles could either be filled with veggies or with juicy pieces of meat which could either be Chicken, Duck or Pork served along with a heady broth.