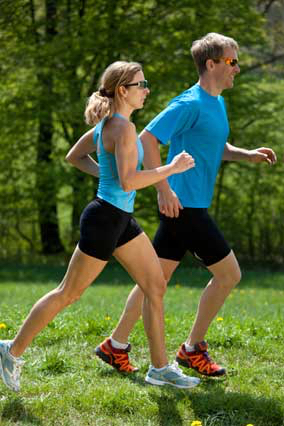 Men and women have different optimum workout times during the day, according to a new study published in Frontiers in Physiology. Researchers say women burn more fat exercising during morning hours, while men burn more fat at night. Women aiming to improve blood pressure also get better results by exercising in the morning, the study says.

Participants did one of the four different exercise routines one day per week for a total of four workouts per week. One group exercised for an hour between 6:30 a.m. and 8:30 a.m., while the other group followed the same exercise routines, but between 6 p.m. and 8 p.m.

The study concluded that the time of day the subjects exercised “may be important to optimize individual exercise-induced health and performance outcomes in physically active individuals and may be independent of macronutrient intake.”

The role of sleep and hormones in physical performance
Megan Johnson McCullough is a National Academy of Sports Medicine trainer, professional bodybuilder, and owner of Every BODY’s Fit in Oceanside, CA.
McCullough says that hormone production and sleep are interrelated. Women spend more time in deep sleep and less time in the lightest sleep phase, compared to men.
“Therefore, it has been suggested that women are more alert and awake in the morning compared to men,” McCullough said. “This notion can relate to women burning more fat when exercising in the morning, partially due to their ability to perform better when the body is more alert during the morning hours. Men might be more alert, and the body is more prepared in the evening time to exercise as a result of needing to wake up the body during the day and then being more alert to exercise later in the day or evening.”

DJ Mazzoni, a certified strength and conditioning specialist who also serves as the medical reviewer at Illuminate Labs, says many other factors contribute to the best time for someone to work out.
“What time of day someone performs best at the gym is too individual of a response to provide recommendations by gender,” Mazzoni said. “People of either gender variably prefer working out at different times throughout the day.”
“I’ve found that people perform best at the gym when they go at a time that works best with their schedule, and which they enjoy,”

Jake Dickson is a certified personal trainer and contributing editor at the strength training website BarBend. He said it’s unclear why men and women responded so differently to the timing of exercise.
“However, nighttime exercise is good for men seeking to improve their cardiovascular and metabolic health as well as their emotional well-being. Improving metabolic health reduces the risk of obesity, type 2 diabetes, cardiovascular disease, and stroke,” Dickson explained.

How To Keep Fit and Healthy To a Ripe Old Age