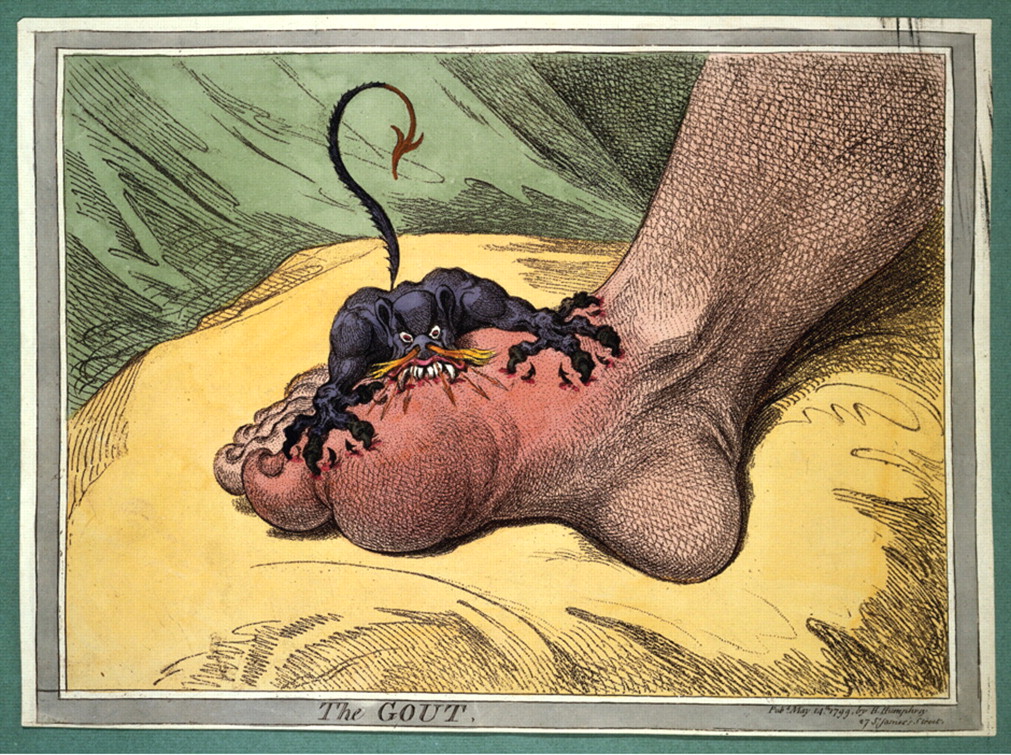 Gout is a painful joint condition which  flares when uric acid, a chemical produced in the body, builds up to an excessive level and starts to form crystals in the affected joint. This triggers inflammation and severe pain, sometimes with fever, muscle aches, and other flu-like symptoms.

Gout attacks come on suddenly, with sharp pain, often in a single joint. The big toe is a common target. Buildup of uric acid can trigger gout attacks. Some people just tend to produce a lot of uric acid. In others, the problem is low kidney function, which can’t keep pace with the uric acid being produced. Taking diuretics (“water pills”) for high blood pressure may also contribute.

Certain foods can increase the risk of gout attacks. These gouty foods contain chemicals called purines, which break down in the body to form uric acid. The chief offenders are red meat, meat gravies, seafood, and alcohol (especially beer). Some vegetables also raise uric acid, such as beans, peas, lentils, spinach, asparagus, cauliflower, and mushrooms. High-fructose corn syrup has been linked to gout.

However, only about 10% of the uric acid produced in the body comes from foods. If uric acid is high, changes in diet alone are not likely to lower it to a healthy level. “It’s not terribly effective,” Dr. Shmerling says.

But don’t ignore diet. Keeping your beer consumption to a minimum may reduce gout attacks. In overweight men, dropping some pounds helps. There’s evidence that eating cherries regularly might reduce your risk a bit, although how much it really helps is unclear.

Overdoing it: No free pass

Although a low-purine diet won’t necessarily immunize a gout-prone man from painful attacks of “the disease of kings,” there are plenty of other good reasons to moderate your meat and savor your seafood and beer in smaller amounts.

Diets high in red meat are associated with cancer and heart disease. Having more than two beers or other alcoholic beverages might not bring on a roaring gout attack every time, but it’s not heart healthy and contributes to weight gain. Nor are there any health benefits to imbibing more than the occasional drinks sweetened with high-fructose corn syrup.